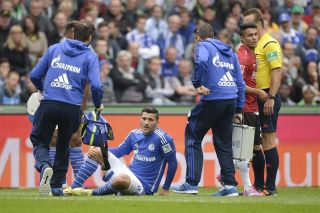 The Bosnia-Herzegovina international was forced from the field 16 minutes into Saturday's 2-1 defeat at the hands of Hannover in Schalke's opening Bundesliga match of the season.

Subsequent tests revealed a tear and Kolasinac is expected to undergo surgery on Tuesday.

The 21-year-old, who featured twice for his country at the World Cup in Brazil, made 24 league appearances for Schalke last season.

Kolasinac was quoted during the close-season as saying he had been offered a move to the Premier League with Manchester United.

However, that transfer failed to materialise, with the player eventually remaining at the club where he has spent his entire professional career.