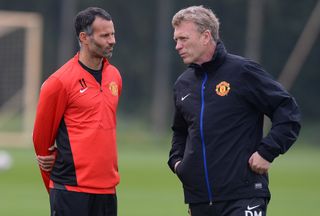 The Old Trafford outfit are currently on a run of three consecutive defeats in all competitions, their first such sequence since May 2001.

But Schmeichel, who spent eight years as a goalkeeper at the club, believes Moyes needs time to adapt the squad and make it his own following the retirement of the long-serving Alex Ferguson.

"He's basically taking over a full squad of Sir Alex's players, hasn't really got any single players in there that he has signed or that he can look in the eyes and say 'you owe your loyalty to me and the club, not to the previous manager'," he said.

"I think any manager coming into a big club needs to have an opportunity to form a team the way that he wants to perform.

"I don't think that David Moyes has had that opportunity yet, but he'll get it and I don't think we're doing too bad to be completely honest.

"I think there's a few players in the dressing room that are not taking the responsibility of being a Manchester United player as serious as I would like. I find that a big shame.

"There's a few players there that haven't been performing this year, year before, and I think at some point the manager needs to make a decision whether to keep them or not keep them and then maybe bring some younger players in instead to make some kind of statement.

And Giggs, who is the only playing survivor from Schmeichel's time at the club and forms part of the United coaching staff under Moyes, feels the club's more experienced players need to step up to the plate and guide the younger squad members through the difficult period.

"It is a test of character, but I am fully confident we will come through it and we will be okay," he is quoted as saying by FIFA.com. "I have said many times over the years, the defeats and losses generate a bigger feeling than winning things. It sticks with you a lot longer.

"You have to react and you have to try and do something about it. It hurts.

"There are players at this club who only know winning. It is important for the older players, who have been through these sticky patches before, to help the younger ones.

"There are good players in the dressing room who probably haven't been playing to the best of our ability, both individually and as a team.

"If we do that, we win more matches than we lose."

"We need to start winning and winning fast."

United host Swansea City on Saturday and will be hoping to avoid a repeat of the performance that saw them lose 2-1 to the same opponents in the FA Cup third round on Sunday.