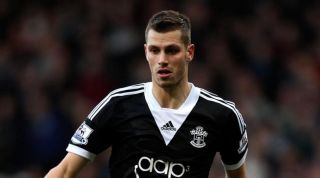 The French midfielder has been continuously linked with a move away from St Mary's Stadium during the close-season, as Tottenham reportedly made several approaches.

Schneiderlin's former coach at Southampton, Mauricio Pochettino, is understood to be very keen on bolstering his Spurs squad with the 24-year-old.

However, Southampton are adamant that there will be no further sales of key players.

Luke Shaw, Adam Lallana, Calum Chambers, Rickie Lambert and Dejan Lovren have all moved on and, although Koeman insisted Schneiderlin will not be allowed to leave, he did praise his attitude.

"No, for us that [situation] is away [gone]," he said. "The rumours about him are away. He played a fantastic match against Liverpool [last Sunday] and how he has acted is fantastic.

"He has to continue to show his qualities like on Sunday and we are happy to have him in the squad.

"It doesn't depend on offers. He will stay at Southampton."

Koeman also spoke in some length about new signing Dusan Tadic – who enjoyed an encouraging debut in the 2-1 defeat at Liverpool last weekend – and youngster James Ward-Prowse, highlighting the impact both made at Anfield in Southampton's Premier League opener.

"Tadic played well," he continued. "He played the assist for our goal. He is a quality player.

"He and [Graziano] Pelle have to realise, though, it is not the Dutch league. It is high tempo during the whole match.

"Sometimes they have a problem with that, but little-by-little they will show why we signed these players."

Koeman added about Ward-Prowse: "He is a great talent. I hope and I think he will have a great future.

"He has already played a lot in the first team and is a boy from the academy. He is a great player.

"He has a good feel for good positions in the midfield and he is important for set pieces. I told him I really like him this week. He has a great future."

Ward-Prowse has been compared with England legend David Beckham, but Koeman said: "Don't put names like that. It will make a lot of pressure for him.

"Of course, Beckham was a great player and it is difficult to compare players to him, but I believe in his [Ward-Prowse's] qualities. If he is showing these abilities now then he will have a great future."