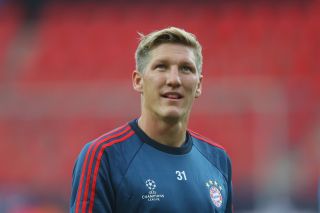 The pair are joined by Bayern Munich team-mate Toni Kroos in regaining a place in Joachim Low's setup after missing the 3-3 draw with Paraguay in Kaiserslautern earlier this month.

Schweinsteiger and Gotze missed out on that game after picking up injuries, while Kroos was absent due to the birth of his child, but the trio have been selected ahead of two crucial FIFA World Cup qualifiers.

Arsenal attacker Lukas Podolski has failed to make the squad after sustaining a hamstring injury during his club side's UEFA Champions League victory over Fenerbahce on Tuesday.

But his absence, and that of Ilkay Gundogan, has allowed Low to hand squad berths to Bayer Leverkusen winger Sidney Sam and Borussia Monchengladbach forward Max Kruse, with the duo having impressed early on this season.

Germany kick off their World Cup qualification double-header with a home fixture against Austria on Friday before travelling out to the Faroe Islands for a game on Tuesday.

Low's men sit top of European Group C, having won four games and drawn one - a 4-4 thriller against Sweden in October 2012.