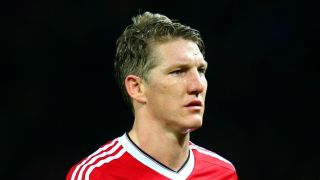 Bayern Munich chairman Karl-Heinz Rummenigge does not expect Bastian Schweinsteiger to leave Manchester United in favour of a return to the Bundesliga.

Schweinsteiger left Bayern for United ahead of last season, but failed to live up to the high expectations at Old Trafford, partially due to ongoing injury problems.

Recent reports suggest he is not part of new manager Jose Mourinho's plans and could be on the move again, but Rummenigge would be hugely surprised if the experienced midfielder were to move back to Germany.

"I am 100 per cent convinced that Schweinsteiger will not return to Germany," Rummenigge was quoted as saying by TZ.

"Bayern Munich are his club and he would never play for another Bundesliga club. I would be hugely surprised if that were to happen.

"I can see him stay at Manchester United and try to achieve their goals under a new coach. Maybe he could surprise Mourinho.

"Either way, Bastian has had an amazing career. Nothing can change that."

Schweinsteiger, 31, has a contract with Manchester until June 2018.