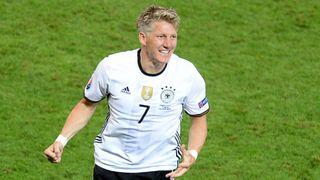 Schweinsteiger's fitness has been closely monitored this week after he sustained minor knee ligament damage in the dramatic penalty shoot-out win against Italy in Bordeaux on Saturday.

With Sami Khedira and Mario Gomez ruled out through injury and Mats Hummels suspended, Schweinsteiger's availability against the tournament hosts represents a huge boost for the world champions.

Low said: "He trained this morning and there were no problems. We trained him individually yesterday and he has recovered 100 per cent. He also showed against Italy that he has the strength to be in the starting XI.

"His experience is very important for us.

"I have always said Bastian Schweinsteiger would be in the starting XI if he could take part in the final training session. We have three players that always play - Hummels, Khedira and Gomez - that are absent and that's why Basti is even more important and that's why he will start tomorrow."

Low will still have to reshuffle his side to cope with the absences of Hummels and Gomez, but he insists he has complete faith in the players that will step in.

"We have to think of the players who can't play and compensate for them," he added. "I trust 100 per cent in the players that will be in the starting line-up and those that will come on, and I hope it won't disturb our style of play.

"I think we will be the strongest opposition France have had so far. Perhaps they haven't had strong opposition yet and we will do everything to reach the final."

Low is wary of France, however, in particular their attacking fluency with Olivier Giroud, Dimitri Payet and Antoine Griezmann all in sparkling form.

"France offensively are the team in the tournament that are very flexible, not only in midfield with Paul Pogba and Blaise Matuidi but they also take their chances most efficiently with Payet, Griezmann and Giroud," he said.

"I think France will attack as they have the pressure of playing as hosts. They are in their own country and will try everything.

"We have to play as a unit and we have to help each other. We have to be compact in defence. If we give them lots of space they can be quick and dynamic. They will make it difficult for us.

"But they have weaknesses, no side is perfect. Their last game against Iceland was impressive but we have noticed a couple of weaknesses. It will be important to exploit them tomorrow."

The last time Germany met a host nation in the semi-final of a major tournament was two years ago in Brazil when Low's men swept to a stunning 7-1 triumph.

Unsurprisingly, the Germany boss has ruled out a repeat in Marseille.

He said: "I don't think we can take much out of that game.

"It was written in the stars and that won't appear in a semi-final again. Brazil were shocked because they conceded so many goals in such a short space of time. France are better defensively than Brazil were then."