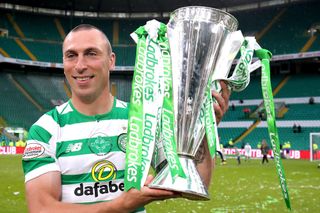 Celtic captain Scott Brown insists David Turnbull will still be made welcome in the Parkhead dressing room despite knocking back an initial offer from the Hoops.

But he warned the Motherwell ace he will have to earn the right to play in Neil Lennon’s first team if he does decide to join the triple treble winners.

Parkhead chiefs issued a take-it-or-leave-it ultimatum to the 19-year-old and his agent Liam O’ Donnell last week after talks on his proposed move to Glasgow broke down.

Brown is hopeful his side’s £3million swoop can yet be pushed through, saying: “The club is still talking to him so you never know what can happen.

“He’s a fantastic young player and this would be a great club for him if he wants to come here. If he does he’ll be welcomed by every single player in that dressing room.

“If David does come here it will be fantastic to work with him because he’s very young and I’m sure he’ll be willing to learn.

“He’ll be a great fit. It’s a great opportunity for him to come in and show what he can do in front of 60,000 fans and hopefully some Champions League football too.”

Celtic released a statement on Friday night insisting they were ready to “move on” to new targets if Scottish Football Writers’ Association young player of the year Turnbull and his representative refused to take up their “magnificent” offer.

The Parkhead deal remains on the table but the likes of Brighton, Sheffield Wednesday, Bristol City and Barnsley are reported to be weighing up their own moves.

However, Brown says Turnbull should know if he does decide to join Celtic, he will not be guaranteed a place in Lennon’s line-up.

“I don’t think anyone is going to get a contract that says you’ll play 100 per cent of the games,” warned the former Hibernian midfielder.

“I had that hunger to come here and win trophies. There was a reason I didn’t go down the road at the time.

“Everyone’s reasons are different. I got that little taste of winning things when we won the League Cup with Hibs. I wanted more of that and have come here and managed to win quite a lot of trophies.”

While Brown is hopeful that Turnbull can be talked into joining the champions, he is also refusing to rule out right-back Michael Lustig recommitting.

The out-of-contract Swede spoke of his frustrations over Celtic’s handling of his situation last week and has been linked with a move to Belgian outfit Gent.

But Brown said: “Lusto has been phenomenal. I think the club and Mikael are still talking and hopefully they can come to some sort of agreement.

“It would be great if he could come back. We all love him in the dressing room. The fans love him too and I think the last season has been some of the best football I’ve seen him play.

“We’ll be sad if he does go but here’s hoping he and the club can get it sorted.”

Meanwhile, Olivier Ntcham could be next to check out of Celtic Park after the Frenchman told reporters in his homeland that a move away from Glasgow was “possible” amid interest from Marseille.

But Brown reminded his midfield partner of his commitment to his current club.

He said: “It’s possible for me to go to Manchester United – everything’s possible.

“I’ve not read the article so I can’t go into too much detail but there’s always going to be interest in players, especially when you look at what he’s done for us since coming in. He’s been fantastic.

“Olivier has seen players come and leave and maybe he sees it as his chance to go but he’s contracted to this club and I’m sure that when he comes back he’ll be having to work just as hard as everybody else to get back into the team.”