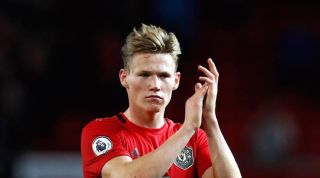 Savage was part of the United academy in the early 1990s but failed to graduate to the first team at Old Trafford.

McTominay was successful in making the step up from youth side to senior ranks, and has been one of United's standout performers this season.

But Parker believes the Scotland international does not provide enough quality in midfield.

“Scott McTominay is a good example of the problem," he told Eurosport. "He just runs around trying to kick people, thumping the badge. He’s like a modern-day Robbie Savage. You need more than that.

“If people are saying United are missing McTominay, they’re not really Man United fans. The reason he’s out injured is because he tried to kick someone and hurt himself. If that’s what people think United are, then they weren’t around for the good times.

“Every time [Ole Gunnar] Solskjaer looks at what his midfield’s going to be – well, let's just say I’m just surprised he’s not gone bald already because it must paralyse his brain that there is no midfield at all at United.

“I’d even look at Solskjaer and ask if he’s got the right people sitting with him on the bench. Does he need someone next to him who has been a manager themselves to sit with him and help him? I would say that maybe he does.

“It doesn’t have to be big names that come through the door in January to fix it. Apart from anything else, how many big-name players want to come to Manchester United at the present moment? I don't believe that's the answer.

“We can talk tactics all day long, but tactics only work if you’ve got players who can understand and execute them, and United don’t have good enough players to do that.

“We can question Ole Gunnar Solskjaer, we can look at his CV. But there’s a bigger problem here. If you’re going to change the manager, then the next one that comes in has got to be able to go out and buy six very good players and four world-class players, because what’s there right now just isn’t good enough.”