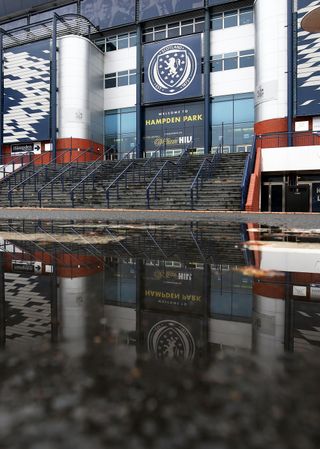 Inverness have been granted another appeal against James Keatings’ controversial red card after the judicial panel’s original decision was ruled invalid, the Scottish Football Association has confirmed.

Keatings was set to miss the Tunnock’s Caramel Wafer Cup final against Raith Rovers after failing to overturn a yellow card for diving in his side’s recent semi-final win against Rangers Under-21s.

The forward was sent off for his second booking – despite television footage clearly showing he was barged over – and the Scottish FA upheld referee Greg Aitken’s initial decision.

But the governing body revealed on Saturday that a member of the three-person judicial panel did not consider all the available evidence and it has ordered a new hearing on a date yet to be confirmed.

A Scottish FA statement read: “One of the panel members has advised that, despite raising no concerns throughout the process, they did not undertake their obligations with respect to the consideration of all the available evidence.

“With that in mind, and only in extremis based on the information provided by the panel member, the determination cannot be considered valid.

“Therefore, the judicial panel secretary has been instructed to convene a new tribunal and a fresh date will be set in due course.”

This is 💯 % stonewall foul that the ref decided was diving not only is this embarrassing but an appeals panel said it was not a foul either what chance have you got James keatings misses the final 🤷‍♂️🤷‍♂️🤷‍♂️ https://t.co/BYkDo3OHma— Alex Rae (@alexrae1969) February 19, 2020

The Scottish FA had come under increasing pressure to re-examine its disciplinary procedures after Inverness received widespread backing for their appeal.

An “incredulous and furious” Inverness had claimed even the “dogs in the street” knew the decision was wrong.

Inverness said they spoke out “on behalf of the growing number of Scottish football clubs who believe that the SFA disciplinary process is not fit for purpose”.