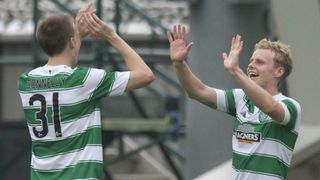 Gary Mackay-Steven's brace helped Celtic to a 3-1 victory over St Johnstone on Saturday, taking the champions six points clear of Aberdeen at the top of the Scottish Premiership table.

Stuart Armstrong restored the league leaders' advantage just prior to the interval before Mackay-Steven netted his second of the game 10 minutes after the restart to secure a fifth straight victory in all competitions for Ronny Deila's men.

Elsewhere, Dundee United ended a wretched run of league form with a crushing 5-1 victory over Kilmarnock.

United had not won a league match since October 31 but they stormed into a four-goal half-time lead at Tannadice. Blair Spittal opened the scoring in the eighth minute before Mark Durnan added a second just after the half-hour mark.

Spittal scored the hosts' third with six minutes remaining before the break and John Rankin hit Dundee's fourth on the stroke of half-time. Sean Dillon made it five prior to a late Josh Magennis effort for the visitors.

Ross County won away from home for the first time since December 12, as goals from Jackson Irvine and Brian Graham secured a 2-1 victory at Motherwell.

Irvine's third goal of the season in all competitions handed the visitors a 1-0 half-time lead, while Brian Graham added a second in the 69th minute. Stephen Pearson's effort with four minutes left was scant consolation for the hosts, as Ross County climbed to fourth as St Johnstone's expense.

Inverness and Partick Thistle shared the points from a goalless draw.