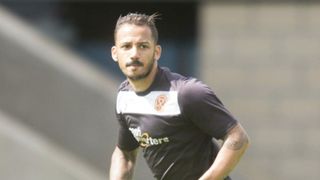 Motherwell lifted themselves back above St Johnstone in the Scottish Premiership with a 1-0 victory over third-placed Hearts at Fir Park.

Although the top three is out of Motherwell's reach with four games to go, they climbed into fourth thanks to Lionel Ainsworth's strike.

The midfielder fired low beyond Neil Alexander just before the half hour to seal the three points, Ainsworth converting having collected Scott McDonald's pass.

Meanwhile, Dundee edged closer to safety thanks to a Kane Hemmings double at Firhill Park.

The striker opened the scoring with his 20th of the season just after the half hour, but Kris Doolan levelled for Partick with 20 minutes to go.

Hemmings was not to be denied his role as match-winner, though, as he sealed all three points late on by firing under Ryan Scully from Greig Stewart's pinpoint pass.