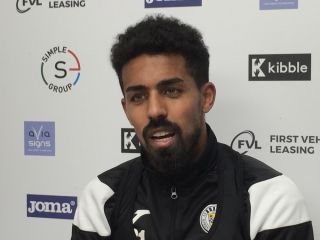 Seifedin Chabbi was delighted to see one very familiar face in Paisley when he travelled from Turkey to sign for St Mirren.

The 26-year-old forward signed on loan until the end of the season from Turkish Super Lig side Gaziantep FK on transfer deadline day.

Ahead of the visit of Ladbrokes Premiership bottom side Hamilton on Wednesday night, the Austria-born Tunisia Under-21s cap spoke of their partnership at former clubs, something which he hopes will bear fruit in Scotland.

He said: “I have played with him at four different clubs.

“We started at Hoffenheim in the youths then two clubs in Austria (SC Austria Lustenau and SV Ried), and now here.

“He was very happy when I came here and I am also happy that he is here because he is not only my team-mate he is also a friend of mine.

“In the last three clubs we have worked very well and I hope in the future also.

“At the last club I scored 25 goals and he made 12 assists of which eight were my goals. So I hope to recreate that.

“I cannot say how many I want to score but I hope as many as possible.”

Boss Jim Goodwin, who now has six strikers in his squad, described the visit of Hamilton as “the most significant game we have had for a long time”.

He said: “We are on a very good run in terms of our level of performance and level of consistency.

“In all competitions we have lost two out of the last 10 if you include the Broxburn game, so we have been doing all right.

“In this particular game, it’s that old cliche, a six-pointer.

“If we go and win it we open up a six-point gap between us and Hamilton, if they come and win then it’s game on again, they level up with us on points.

“So there is no need for us to remind the players or anyone else, how important this game is. It is huge.”