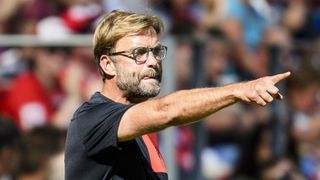 Jurgen Klopp has urged Liverpool not to "make presents for other clubs" by selling any of the six strikers vying for places in his team.

Klopp added Sadio Mane to his attacking options during the close season, and the Senegalese striker will compete with Daniel Sturridge, Divock Origi, Mario Balotelli, Danny Ings and Christian Benteke for a place in the Reds' starting line-up.

Speculation linking Benteke with a move away from Anfield suggested Klopp was willing to streamline his squad, but the German has now indicated that to sell any of his frontmen might benefit Liverpool's rivals.

"Benteke, Balotelli, Ings, all the other strikers ... they are really good strikers," Klopp told a news conference. "But at the end, having six strikers is a little too much, but is still possible.

"If we give presents to other clubs because we have 'too many strikers', that's the biggest mistake.

"Until August 31, I could change my mind. I'm not that type of guy but I could. We will see what happens."

Liverpool travel to the Emirates Stadium to face Arsenal in their opening game of the new Premier League season on Sunday, and Klopp may be unable to select Sturridge, who has a hip injury, and midfielder James Milner, who is suffering with a heel problem.

"With Millie [Milner], it's not too serious," said Klopp. "It's a bruise in the heel. We have to wait a little but it's possible he can be involved.

"Sturridge could be involved in team training but missed a few sessions, so we have to make a decision. He could train today [Friday] 100 per cent. After this I will make a decision what kind it will be."

Klopp, who signed Loris Karius, Ragnar Klavan and Joel Matip as well as Mane ahead of the new season, made it clear he views the Liverpool squad as very much as his own, rather than the one he inherited from predecessor Brendan Rodgers.

He said: "I never used the excuse 'that's not my team' last season. I enjoyed my work from the first day here.

"It's not like learning to ride a bike; with football you have to keep learning. But we're in a much better position than on July 2.

"We have made seven transfers, sold a few players, loaned a few players ... we still have our base from last year and I hope we can build on that."