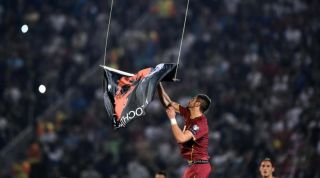 With the score at 0-0 in the first half of the Group I clash at Stadion Partizana in Belgrade, a drone carrying a flag featuring Albanian national symbols entered the stadium and hovered over the pitch.

The two sets of players clashed after Serbia defender Stefan Mitrovic attempted to pull the flag down, while some supporters entered the pitch as the situation escalated.

Referee Martin Atkinson took the players from the field and the match - which was set against a backdrop of political tensions - was duly abandoned with the two sides unable to agree on a resumption.

The Serbian FA has described the action of the Albania players as "aggressive" towards Mitrovic and suggested the fans who took to the pitch had "succumbed to the provocation".

A statement from the organisation read: "Football Association of Serbia is expressing regret that the match between Serbia and Albania did not finish in a sports manner, as a very important event of two countries' best teams should have.

"In atmosphere that has not been seen for a long time in Serbia, with support of fans acting like one, Serbian national team players, with their good game, were heading towards an important victory on their way to France 2016.

"Unfortunately, because of a provocation from the opponent's side, started by entering a flag of non-existing so-called "Great Albania" that as such offends feelings of all citizens of Serbia, Montenegro, Macedonia and Greece, with help of a drone that came from outside of the stadium, and that was continued by inappropriate scenes on the pitch, the match was not finished in the usual way and therefore our national team players lost chance to show who was better and of more quality in a fair, sportsmanlike and chivalrous contest.

"At this moment we do not want to deal with presumptions about the final solution. We do emphasise that while preparing this match we were in constant touch with all appropriate and relevant state authorities."

Addressing the eventual abandonment of the fixture, the statement continued: "We declare under full responsibility that the match referee and the match delegate made a decision for the match to be continued.

"FA of Serbia and our representatives accepted that, but unfortunately not the people from the Albanian FF [Football Federation] and their national team.

"We welcomed our guests from the Albanian FF in the best possible way. Because of that, we are truly worried by the fact that, after decision of the match officials (delegate and referee) for the match to be continued, they did not do anything for that to happen.

"They simply took UEFA rules in their own hands interpreting them as they preferred. According to that, we estimate that they are directly guilty for the match abandonment and we expect that UEFA disciplinary bodies will register the match with 3:0 result, in favour of Serbia."

UEFA confirmed on Wednesday that it had begun disciplinary proceedings after receiving match reports from Atkinson, the security officer and the match observer.