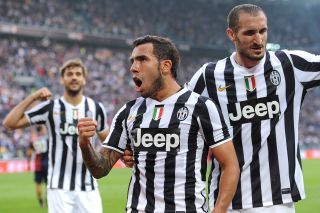 Any hangover from last weekend’s 4-2 defeat to Fiorentina was in no way apparent as Antonio Conte's side completely dominated the opening 45 minutes.

Arturo Vidal converted a questionable 23rd-minute penalty and the heroics of goalkeeper Mattia Perin either side of the opening goal leant a generous reflection to the scoreline for Genoa, before Carlos Tevez netted a brilliant second nine minutes before half-time.

Tevez and strike partner Fernando Llorente were superbly denied by Perin after the break and the Argentinian forward's customary intensity stood out as the game sauntered to its close at a lacklustre pace.

Genoa omitted Francelino Matuzalem from their starting XI after the midfielder was caught drink driving this week, while Leonardo Bonucci, Mauricio Isla and Kwandwo Asamoah returned to the Juventus line-up following their 2-1 UEFA Champions League defeat to Real Madrid.

Perin thwarted Paul Pogba in the 12th minute as the midfielder failed to get the ball out of his feet before Llorente's lofted follow-up was also saved.

His next stop from the same player was far more impressive – reacting to keep out a point-blank volley having palmed Tevez's right-wing centre towards the former Athletic Bilbao striker.

The crossbar came to Perin's rescue in the 19th minute as Vidal's crisply struck 25-yarder cannoned to safety.

Giorgio Chiellini then headed narrowly over from a corner and Genoa's laboured resistance was finally broken when Davide Biondin sent Asamoah tumbling in the area, although the contact appeared to be fractionally outside the box. Vidal dispatched the spot-kick emphatically.

Perin was called into action with another superb save three minutes later, this time denying Andrea Pirlo, who skilfully held off Thomas Manfredini to get a shot away.

Biondin was almost the Genoa villain again on the half-hour mark when he was needlessly dispossessed by Pogba, only for the ex-Manchester United man to shoot beyond the far post.

Tevez added the seemingly inevitable second goal for Juve, shielding the ball from Juraj Kucka after collecting Asamoah's low cross and swivelling away from Sime Vrsaljko before drilling home a left-footed strike.

Genoa boss Gian Piero Gasperini made a double change at the interval, sending on Giannis Fetfatzidis and Moussa Konaté in place of Luca Antonelli and Alberto Gilardino, while also altering his team's shape to match the host's 3-5-2 formation.

Juventus’s forwards once again found Perin in inspired form as he beat away a venomous 52nd-minute drive from Tevez and touched over Llorente’s first-time attempt from the rebound.

The match began to meander as Juventus sat comfortably on what they had and Genoa still failed to make any significant attacking impression.

Juve are now level on 22 points with second-placed Napoli and hot on the heels of leaders Roma, while Genoa sit just above the relegation zone with two wins from nine matches.