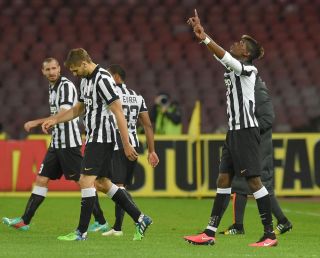 Paul Pogba opened the scoring at the San Paolo, where Juve had not won since 2000, with a stunning volley in the 29th minute that marked his fifth goal of the campaign.

Napoli levelled in the 64th minute thanks to defender Miguel Britos, but any hope of the hosts completing the turnaround were dispelled by two further second-half goals from Juve.

Martin Caceres - who had not featured for the Turin club since October due to a thigh injury - restored Juve's lead in the 69th minute by turning home an Andrea Pirlo free-kick.

A Caceres own goal was chalked off and Napoli spurned a number of late chances before Arturo Vidal slammed in a third in stoppage time to give Juve a measure of revenge for their Supercoppa Italiana defeat to Rafael Benitez's side last month.

In an otherwise quiet start, Napoli wasted a gilt-edged chance to take the lead as Jonathan de Guzman blazed over the crossbar from close range after Giorgio Chiellini failed to clear.

Juventus had struggled to impose themselves on the game but took the lead in magnificent fashion through Pogba.

Carlos Tevez's strike rebounded off Fernando Llorente and straight to the France midfielder, who arced a superb first-time hit from the left-hand side of the area into the bottom-right corner.

Juve began to dictate play following that opener and could have doubled their advantage had Caceres not hit his shot straight at Napoli goalkeeper Rafael at the end of a free-flowing move.

Napoli winger Jose Callejon saw an effort deflected into the side-netting by Chiellini a minute after the restart, with the Juve centre-back then requiring lengthy treatment following a clash of heads with team-mate Patrice Evra.

The visitors had rarely been threatened in the second period, but were made to pay for a defensive lapse as Britos struck.

Left in acres of space, the Uruguayan defender met Dries Mertens' corner from the left with a volley beyond Gianluigi Buffon.

Yet parity lasted all of five minutes, Caceres restoring Juve's advantage by scuffing home Pirlo's right-wing delivery to net his first Serie A goal since his October 2012, which also came against Napoli.

Caceres almost went from hero to zero as he diverted the ball into his own net, though play was called back for a foul on Gianluigi Buffon, who denied Gonzalo Higuain from point-blank range in stoppage time.

And, from the resulting corner, the visitors burst clear - Vidal converting the counter with a rifled 20-yard effort to earn a result that re-establishes the champions' command in the Scudetto race.