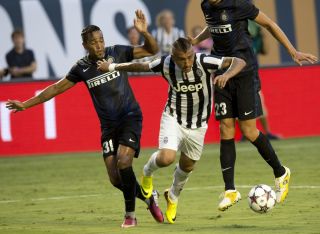 Both sides have won their opening two matches of the season and will consider themselves contenders for the Serie A crown.

The pair are two of Italy's most successful clubs, with 47 top-flight titles between them - with Juventus winning the last two under Antonio Conte.

Juventus have the better record in the past 10 meetings, with five wins to Inter's three, and Conte will be hoping that his side can repeat last season's impressive 2-1 victory.

In fact, Juventus have not lost at San Siro in their last three visits in the league - winning two and drawing the third.

After a disappointing season under Andrea Stramaccioni in which they finished ninth, things are starting to look more promising under new coach Walter Mazzarri.

The former Napoli manager brought in 13 players during the close-season and they have made a solid start to the campaign.

Both teams have scored five goals in the league so far, with Inter yet to concede, while Gianluigi Buffon has been beaten once.

Juventus midfielder Claudio Marchisio - who will miss the game with a knee injury - admitted that games between the sides are always intense battles and he expects to see the same on Saturday.

"Inter have always made it difficult for us," he said. "They beat us last year and also have a new coach.

"They are capable of playing good, fierce football.

"For us to beat a strong team like Inter on the third day of the season would be a real boost of confidence.

"I am sorry not to be there, but the team is doing well. I have great confidence in my team-mates."

Conte has new injury worries coming into the game after two of his squad returned from international duty facing spells on the sidelines.

Mirko Vucinic was carried off on a stretcher during Montenegro's FIFA World Cup qualifying game with Poland with a knee injury.

The 29-year-old's knee is said to be swollen and with a UEFA Champions League clash against FC Copenhagen on the horizon, Conte does not want to run the risk of further aggravating the injury.

Martin Caceres will definitely need an operation to repair the torn external meniscus in his right knee that he injured during Uruguay's qualifier with Peru.

The full-back is expected to be out for six weeks while he recovers from the injury.

Carlos Tevez is due to start for the defending champions, but his partner could be Fernando Llorente, Sebastian Giovinco or Fabio Quagliarella.