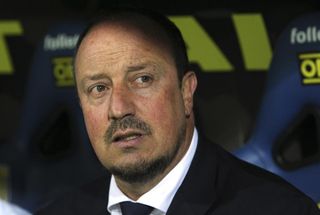 The Spaniard spent a turbulent six months at the Milan outfit in 2010 before he was relieved of his duties by former owner Massimo Moratti and returns for the first time on Saturday, when both sides have European qualification in mind.

Benitez has cemented Napoli's place in the top three in his first season at the club and can guarantee UEFA Champions League football this weekend.

If Napoli can match, or better Fiorentina's result against Bologna they will be assured of a place in the qualifying rounds next season, while Inter are on course to seal their spot in the UEFA Europa League.

Walter Mazzarri has not had an easy first season at the helm after leaving Napoli to take over at San Siro, but they have a five-point advantage over Parma and city rivals Milan in the race for fifth place.

Inter are unbeaten in five games and if they can extend that to six against Benitez's side, then they will fancy their chances of securing a European spot.

They come into the clash having scored six goals without reply in their last two games and will look to 17-goal striker Rodrigo Palacio for inspiration.

The 32-year-old Argentina international, Inter's leading scorer, knows they will have to be at their best in order to extend their unbeaten run.

"We have Napoli, another difficult match, and it is important for us to put in a great performance to try to qualify for the Europa League," he told Inter's official website.

"We're looking good at the moment and I think we're having a decent season."

Both sides will be depleted in defence through suspension, but it is Inter who will be affected the most, with Rolando and Walter Samuel serving one-match bans, while Juan (knee) and Jonathan (shoulder) are injury concerns.

Napoli will be without the suspended Federico Fernandez, but otherwise should have a fully fit squad for Benitez to pick from bar Christian Maggio, who is still recovering from a collapsed lung.