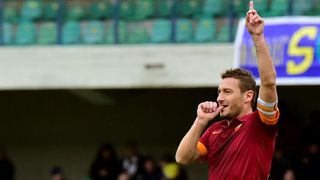 Rudi Garcia's men are unbeaten in the league since the mid-season break but have now drawn five of those seven matches and are nine points off the pace in second.

Verona headed into the fixture having lost six of their past seven games and they were behind once more when Fernando Totti's drive from distance evaded goalkeeper Francesco Benussi.

But Roma would not return the three points they craved as Bosko Jankovic's header from Emil Hallfredsson's corner deflected off both Davide Astori and Seydou Keita before finding the net in the 38th minute.

Having upset third-placed Napoli last time out, Palermo took a 26th-minute lead when Paulo Dybala capitalised on an error from Mauricio.

Lazio replace Fiorentina in fourth after a frantic finish to their game with Torino at the Stadio Artemio Franchi resulted in a 1-1 scoreline.

Khouma Babacar missed a 10th-minute penalty for the hosts but, when January recruit Mohamed Salah combined with Alberto Gilardino to fire a low finish five minutes from time, it looked like his miss would not be costly.

Milan eased the pressure on under-fire boss Filippo Inzaghi courtesy of a 2-0 win over lowly Cesena - Jack Bonaventura opening the scoring and Giampaolo Pazzini sealing the points with a last-minute spot-kick.

Elsewhere Empoli claimed an important 3-0 win over Chievo, while the scheduled game between Parma and Udinese was postponed on Friday amid dire financial straits for Serie A's bottom club.