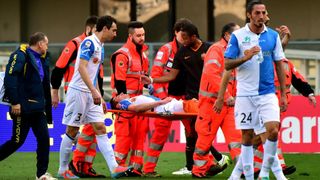 Roma coach Rudi Garcia called for his team to show the same sort of intensity as they did in last Monday's 1-1 draw at leaders Juventus.

The call went unheeded, though, as Roma struggled to their eighth draw in nine league matches.

Juan Iturbe blazed over early on, while Gervinho also shot wide of the post from a promising position inside the penalty area.

However, of more pressing concern was the injury sustained by 19-year-old Mattiello. The Chievo man - on loan from Juve - bent the lower part of his leg into a right angle in a challenge  Roma's Radja Nainggolan, before he was taken from the pitch on a stretcher.

Torino's hopes of playing European football next season suffered a blow in a 3-2 defeat at Udinese.

Fabio Quagliarella put the away side ahead after the 15th minute, but goals from Antonio Di Natale and Molla Wague either side of a Cristian Molinaro penalty put Udinese in control.

Marco Benassi pulled a goal back with just over 20 minutes remaining, but it proved to be a mere consolation.

Atalanta moved four points clear of the drop zone after being held to a frustrating 0-0 draw at rock-bottom Parma, who finished the match with 10 men.

The hosts, who are in dire financial straits, reached an agreement with stewards in order that the contest could go ahead.

Struggling Cesena also played out a 0-0 draw at home to Palermo, while Empoli and Genoa finished 1-1.