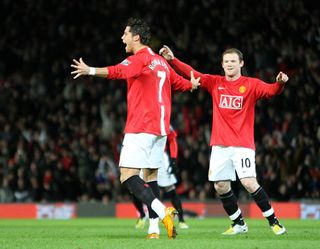 Lionel Messi scored a sublime free-kick to help Barcelona take a 3-0 lead from the first leg of their Champions League semi-final against Liverpool at the Nou Camp.

It was Messi’s 600th career goal for the Barcelona, the Argentina play-maker bending the ball around the outside of the wall and into the top-left corner past Alisson.

Here, Press Association Sport’s Jim van Wijk takes a look at some other memorable free-kick strikes for both club and country.

Messi’s great rival for the accolade of the world’s best player has long been a dead-ball specialist – as he showed when still an emerging talent with Manchester United.

The Portugal winger, then approaching his 23rd birthday, had put Sir Alex Ferguson’s side ahead after a neat one-two with Nani and soon followed that up with a wonderful 25-yard free-kick.

With England striker Wayne Rooney offering a few quick words of encouragement, Ronaldo took a couple of long strides backward to set himself before crashing the ball up and over the wall and into the top-right corner past a static David James.

United went back to the top of the table, and afterwards Ferguson hailed Ronaldo’s strike. He said: “That without doubt must be the best (I’ve seen in the Premier League). From that distance he is going to hit them. No keeper in the world would save that.”

There were only around four minutes played of the 1991 FA Cup semi-final at a sell-out Wembley when Tottenham were awarded a free-kick some 40 yards out.

As the England midfielder lined up to take it, commentator Barry Davies asked: “Is Gascoigne going to have a crack? He is you know….” before the ball was drilled past David Seaman into the top right corner.

Spurs went on to win the tie 3-1 and would lift the cup when they returned to Wembley for the final against Nottingham Forest, during which Gascoigne suffered what would turn out to be a serious knee injury.

It was 19 years ago today that David Beckham made his @England debut in Moldova. But what was his best moment? This?https://t.co/2kvJCgad9N— England (@England) September 1, 2015

England had looked set to be facing a play-off to reach the 2002 World Cup finals as they trailed Greece 2-1 heading into stoppage time at Old Trafford.

United midfielder Beckham, though, had other ideas when Teddy Sheringham had been bundled over some 10 yards outside the box in a central position.

Beckham took a moment to compose himself before whipping the ball up over the wall and into the far corner – sending Old Trafford into delirium and Sven Goran Eriksson’s on to the finals in Japan and South Korea.

Some 35 yards out, Carlos, striking with the outside of his boot, looked to have sent the effort spinning well wide before the ball curled back and went in off the post past the deceived French goalkeeper Fabien Barthez.

Carlos himself later admitted he had “no clue” how he scored, adding: “I just hit it and it went in.”

Ally MacLeod’s Scotland had been expected to open their 1978 World Cup campaign with a win over the South Americans in Cordoba.

Everything appeared to be going to plan when Joe Jordan put Scotland in front after 14 minutes, but Cesar Cueto finished off a neat passing move to equalise just before half-time.

Things went from bad to worse for the Scots in the second half. Don Masson’s penalty was saved before Cubillas, dubbed the ‘Pele of Peru’, put his side in front with a fierce drive.

Cubillas then fired in one of the most memorable World Cup free-kicks. After a team-mate ran over the ball, “El Nene” smashed it with the outside of his right foot past Alan Rough into the top-left corner.