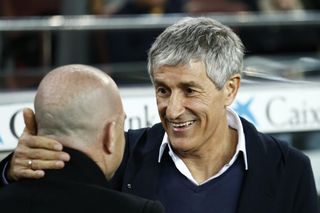 Barcelona manager Quique Setien is expecting a “special game” as he returns to former club Real Betis on Sunday for the first time since stepping into his new role.

The 61-year-old left the Andalusian club in May before replacing the dismissed Ernesto Valverde at the helm of Barcelona in January.

His Betis departure came after a spell of poor form saw finish tenth place in the La Liga table, though the club has fared little better this season and head into Sunday’s clash 13th.

“It’s a special game for me and my staff,” Setien said in a pre-match press conference as reported by the Barcelona website.

“We spent two extraordinary years there and it is true that the match has some special connotations. We know the team well and, although new important players have arrived, we have quite a deep knowledge of these players.

“But that doesn’t mean that we’ll have them under control. We know that it will be a difficult game. Their last results have not been what they wanted, but against Real Sociedad they played a great game.”

Though ousted from his job at Betis, the Spaniard insists there is no ill-feeling between himself and the club.

“I spent two wonderful years at Betis, I only have words of thanks. I grew up there both professionally and personally, he added.

“There are many people who may think that the last months were hard but that is forgotten. The day-to-day was extraordinary, spectacular.

“I remember how happy I was during those two years, the successes and the friends I left, how brave we were and those situations.

“The last months seemed hard but I have no grudges of any kind. I understand the criticism, there are many people that understood we could do better, and I accept it.

Setien’s new club sit second in the La Liga under his leadership, but saw their Copa del Rey campaign come to an end on Thursday after a 1-0 defeat to Athletic Bilbao.

His Betis successor Rubi is not allowing the absence of both Gerard Pique and Luis Suarez to breed any complacency ahead of the fixture.

His squad have only enjoyed one victory in their past five fixtures and have also been knocked out of the Copa del Rey after defeat to Segunda Division side Rayo Vallecano on penalties.

“We need and want a victory whoever the team is ahead,” Rubi told the club website.

“On Sunday comes a great rival. The casualties of Suarez or Pique mean nothing because we have already learned from the first leg. They lacked Messi and we lost 5-2, so that the fact that they have important absences for this match does not generate any kind of excess of confidence.

“We know that Barca have great players and that they will be annoyed for not having passed the Copa del Rey qualifier. It will pose a difficult game for us, but it will be attractive. We are strong at home and are convinced that it may be the day to beat Barca.”