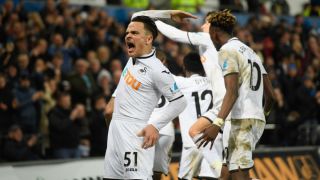 Sevilla have rescued Roque Mesa from his disappointing spell with Swansea City after signing him on loan until the end of the season.

Mesa joined Swansea from Las Palmas for a reported fee of €12.5million in July after two excellent seasons in LaLiga.

The 28-year-old has started just nine of rock-bottom Swansea's 24 Premier League games this season, however, with the last coming on December 30 against Watford.

Mesa had been linked with a return to Las Palmas but Sevilla, reportedly keen on signing a back-up to Ever Banega, have won the race and will be able to offer him a first taste of Champions League football.

Vincenzo Montella's side face Manchester United in the last 16, with the first leg at the Ramon Sanchez Pizjuan taking place on February 21.

Sevilla have been long-term admirers of Mesa and had been particularly keen on him when Banega left for Inter in 2016, though they felt they were priced out of a move.

Mesa becomes the club's third January signing after the arrival of Brazil Under-20 left-back Guilherme Arana from Corinthians, and Miguel Layun from Porto on loan.

We can confirm that has joined on loan until the end of the season.Good luck, Roque!Full story  January 30, 2018