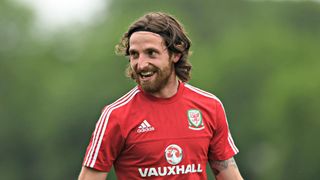 Sevilla are interested in the prospect of signing Liverpool midfielder Joe Allen and rising Brazil star Ganso, according to Monchi, the club's sporting director.

Wales international Allen has been linked with a possible move away from Anfield after failing to cement his place in Jurgen Klopp's regular first-team plans.

Ganso, meanwhile, has been the subject of an €8million offer from Sevilla, though Sao Paulo president Carlos Augusto Barros considers the valuation too low.

Monchi has admitted that both midfielders "fit the profile" of player they are looking to sign following the sale of Grzegorz Krychowiak to Paris Saint-Germain, he stressed that there are other targets in mind.

"It would take all afternoon to list everyone and I don't like talking about players who aren't Sevilla's," he told Estadio Deportivo.

"Ganso and Joe Allen are not the only ones on the list. They fit the profile, but they don't have to be the ones who come."

Monchi also confirmed that Liverpool forward Luis Alberto has been offered to Sevilla, though no talks have taken place between the club and the player.

The 23-year-old impressed during a loan spell back in La Liga with Deportivo La Coruna last season, and reports have suggested that the Europa League holders are set to table an offer worth close to €10million.

"There is an offer from his agents to return to Sevilla. But no negotiations have started," he said.

"He's a player who has characteristics for the kind of game that we want to have, but there are other names. We're looking at that option in the same way as others."

Monchi was more optimistic over a deal for Matias Kranevitter, with the 23-year-old expected to complete a loan move from Atletico Madrid.

"We're more optimistic than yesterday, the transaction is not yet closed," he said. "You can't take anything for granted, but it's closer than yesterday. We hope to have some news soon."

One player unlikely to move to the Ramon Sanchez Pizjuan is Wissam Ben Yedder, despite rumours that the 25-year-old is a target for new head coach Jorge Sampaoli.

"The subject of Ben Yedder is more from the press and social media than anything else," Monchi said of the striker, who scored 17 times to help Toulouse to Ligue 1 survival last season.

"He's not a priority for Sevilla right now. There are other priorities for that position."