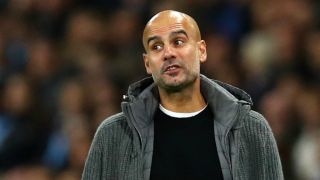 Pep Guardiola laughed off his coaching being described as "better than sex" by former Barcelona defender Dani Alves, saying: "I prefer the sex - by far!"

Alves, who won two Champions League titles at Camp Nou under Guardiola's stewardship, made the comment in the new Barcelona film 'Take the Ball, Pass the Ball'.

The right-back, now with Paris Saint-Germain after a season in Italy with Juventus, was one of Guardiola's key players during a highly successful era for the Catalan giants.

But, speaking to the media ahead of Sunday's derby day clash with rivals Manchester United, Guardiola did not agree with Alves' amusing assessment.

And the City boss found time to launch an apparent dig at former United striker Zlatan Ibrahimovic, having reportedly fallen out with the Swede during his time at Barca.

"I prefer the sex by far," Guardiola told reporters at his pre-match news conference to widespread mirth.

REPORTER: Dani Alves said "being coached by you is better than sex”...PEP: I prefer the sex! November 9, 2018

"I can see a huge list that is the opposite side, a list where they love me a lot, and Dani is one of them.

"But the other side, in Sweden and other places, they don't like me as much. Normally the people who don't play regularly, they are not fans.

"We try to convince them - sometimes yes, sometimes no."