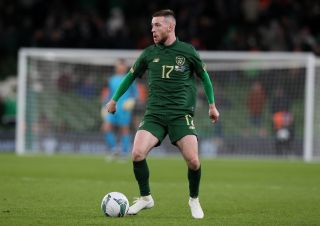 Shamrock Rovers midfielder Jack Byrne has been called into the Republic of Ireland squad for next month’ Euro 2020 play-off semi-final in Slovakia.

The Rovers playmaker and Blackburn defender Derrick Williams have been added to the party which contested this month’s Nations League fixtures against Bulgaria and Finland.

Striker Troy Parrott, who is on loan at Millwall, missed those games with a thigh problem and has not been included this time around as he battles an ankle injury suffered during his debut for the Lions.

Ireland face the Slovakians in Bratislava on October 8 knowing only victory there will keep their Euro 2020 finals hopes alive with the winners of the tie between Bosnia and Herzegovina and Northern Ireland awaiting the victors.

Kenny’s men then return to Dublin for a Nations League clash with Wales on October 11 before meeting the Finns once again in Helsinki three days later.

The Republic currently sit in third place in League B 4 after Shane Duffy’s last gasp equaliser snatched a 1-1 draw in Bulgaria before a 1-0 home defeat at the hands of Finland earlier this month.