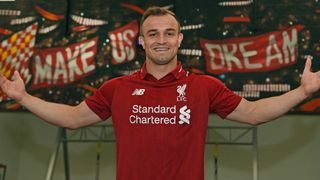 Xherdan Shaqiri believes Liverpool are capable of going one step further and winning the Champions League this season.

Liverpool made a dream run to the Champions League final in May, but fell at the final hurdle when Gareth Bale scored twice to condemn the Reds to a 3-1 defeat to Real Madrid.

Shaqiri – who arrived from relegated Premier League side Stoke City – has played in Europe with Basel, Inter and Bayern Munich, where he won the Champions League in 2013.

And the star Switzerland international has set his sights on another winner's medal with the Merseyside club.

"I hope I can repeat that because I know how it feels to win the Champions League," Shaqiri told Sky Sports News.

"It is really amazing and I think we can do it. We have good quality - especially with the new players that have been brought in - they have very good quality. I'm looking forward to the new season and I hope we can finally win titles.

Shaqiri also admitted that Jurgen Klopp was a key reason why he signed with Liverpool, having become familiar with the German manager from his time in the Bundesliga with Borussia Dortmund, who Bayern defeated in that 2013 final at Wembley.

"When I heard the club wanted me I wanted to come because I've known him [Klopp] a long time. I've admired him for a long time and I am really happy to be here.

"Jurgen Klopp is a great person and a great character with a winning mentality and that's the most important thing."