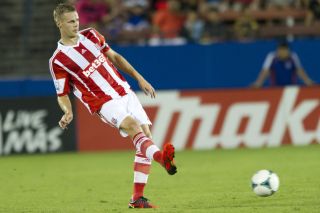 The Welshman has talked of wanting Stoke to play a more attacking brand of football after their style was criticised by many in the game under former manager Tony Pulis.

While Shawcross would welcome such a change, he is also eager to ensure his team-mates do not forget their defensive strengths.

"It's different. We're trying to play a bit more on the floor and I think we're adapting well," the 25-year-old told The Sentinel.

"I don't think you can mess too much with the Stoke way. We're tough to beat, but we've got some quality players here, and Mark Hughes has recognised that."

Stoke came from behind to beat Crystal Palace 2-1 in the Premier League on Saturday thanks to two goals in four minutes from Shawcross and Charlie Adam.

The former Manchester United defender feels his side's performance showcased the ideal blend of the styles.

"In periods against Palace I thought we played some good stuff, but we also mixed it up," he continued.

"Overall I think we'll have a very successful season under the new manager.

"We don't want to lose our strengths, but we want to be better offensively too."

Stoke face Walsall in the League Cup on Wednesday before travelling to West Ham in the Premier League on Saturday.