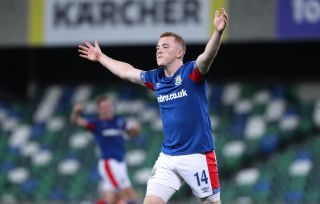 Northern Ireland striker Shayne Lavery insisted his move to the Irish League is not a step back as he said he has no thoughts of immediately targeting a return to England.

The 20-year-old joined Linfield on a one-year deal in the summer after being released by Everton, and has made an immediate impact with four goals in nine games, including a memorable brace against Qarabag in the Europa League qualifiers.

His form – coupled with an injury for Paul Smyth – has earned him a return to Michael O’Neill’s Northern Ireland squad for the upcoming games against Luxembourg and Germany, and left the impression his spell in the Irish League could be a short one.

“I’m not really thinking about it at all,” said Lavery, who earned his only cap to date against Panama last year.

“I’m not thinking about January or next summer, I’m just taking it game-by-game.

“I don’t see it as a step back at all. It’s just good to be back playing football again and showing people what I can do.”

Lavery signed for Everton as a 16-year-old but never made a senior appearance.

After struggling for game time with the under-23 side, he joined Falkirk on loan last season but also found himself on the fringes there, prompting a move back home in the summer.

Northern Ireland’s record goalscorer David Healy was quick to snap him up for Linfield and has been quickly rewarded.

The highlight so far was unquestionably his second goal of the first leg against Qarabag, when he dispossessed a defender on the halfway line and raced towards goal, neatly cutting inside another man before curling a shot inside the far post.

Lavery said it was the best goal of his career to date, though he struggled to enjoy it at the time.

“I just remember being completely wrecked after the game, I couldn’t really stand,” he said.

“But it was nice to get two goals, especially it being the play-offs and the (standard) of opposition against us.”