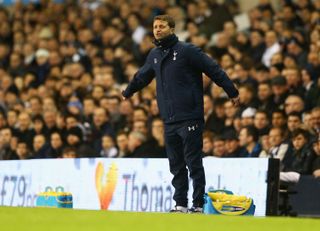 The 44-year-old took caretaker charge for the first time in Wednesday's 2-1 League Cup defeat to West Ham, following the dismissal of Andre Villas-Boas on Monday.

Despite the loss, Sherwood is confident he has the ability and knowledge of the club to turn Spurs' form around.

"If it was down to me I'd be getting a 10-year contract now, but football doesn't work like that," he said.

Sherwood, who was brought to the club as technical co-ordinator by Villas-Boas' predecessor Harry Redknapp, claims anything less than the managerial position would not interest him.

"Long term, it's number one or nothing," he added, "Going back to being an assistant is not for me. It's the chairman’s decision.

"I'm going to be taking the (Southampton) game (on) Sunday but the games come thick and fast don't they, so I don't know when we're going to fit it in."