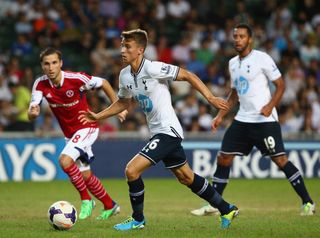 While the 21-year-old has first-team football hard to come by at White Hart Lane , Sherwood feels he could offer something different and play a similiar role to former Tottenham man Luka Modric - now at Real Madrid.

The 45-year-old, who took over from Andre Villas-Boas in December, also revealed he tried to recall Carroll from his loan at Loftus Road in a bid to give himself more midfield options.

"Sometimes you want to bring someone on to make a difference, a different type, and I just think the blend's not fantastic," Sherwood told The Tottenham Journal.

"But that takes time to work with and it's also in the recruitment process of the club.

"Sandro and (Etienne) Capoue are similar in stature and in the way they break up the game. I think Paulinho's a little bit different, he likes to break forward into the box.

"But we miss that player - I'm not saying (Mousa) Dembele can't do it because he can pick it up and he can dribble – but we miss someone who moves that ball and passes it between the lines very quickly, and he assists the assister.

"Gareth Bale needed that ball very quickly and I think Luka Modric got it to him very quickly. I think Tom Carroll was that player - he can do that, absolutely. I tried to bring Tom back (in January), it just wasn't possible."

While Sherwood has been unable to play call upon Carroll, teenage Algerian midfielder Nabil Bentaleb was afforded a number of opportunities early in his reign.

The 19-year-old has, however, been an unused substitute in Tottenham's last four outings and Sherwood explained that it was for his own good.

"He's been unlucky not to be playing, but I'm trying to protect him – and I think Manchester United did the same with (Adnan) Januzaj. He's not featured in the last month or so," he added.

"Sometimes a young boy can't go in (the team) and stay in forever. It's an art of when to put them in and when to bring them back, but he (Bentaleb) isn't shying away and he wants to play more than anyone."