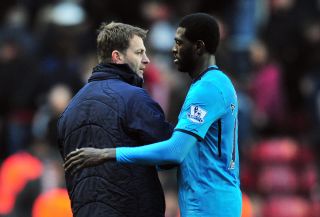 The 44-year-old has taken temporary charge of first-team affairs after Andre Villas-Boas left the club following the 5-0 drubbing against Liverpool last weekend.

Sherwood claimed his first win in Tottenham's 3-2 triumph at Southampton on Sunday as a resurgent Emmanuel Adebayor notched a brace in his first Premier League start of the season, taking his tally to four from his last five top-flight starts.

The former Tottenham midfielder does not know if he will be at the helm for the home match against managerless West Brom on Thursday, but insists he is not in favour of a short-term solution.

"I never said I did want the job, or that I didn't want it," Sherwood told Sky Sports.

"I have to talk to the chairman and see where they want to take the club, hopefully that will happen soon because these boys need a manager.

"I don't want the job for 10 minutes, I want it long term. It's a great honour to manage this football club with its honour and tradition, but it has to be right for me.

"I enjoyed the win but we're back to work on Boxing Day (against West Brom)."

Sherwood's opening game in charge ended in a 2-1 defeat to West Ham in the League Cup on Wednesday, a fixture that saw Tottenham opt to start with two strikers, a direct difference to Villas-Boas' tactics.

Roberto Soldado partnered Adebayor in attack and Sherwood believes the latter needed no motivation after being frozen out of the first-team picture under Villas-Boas.

He added: "Emmanuel hasn't been playing. It doesn't take much motivation to throw him back in the team because of what he's done.

"He scored goals for Arsenal and Manchester City.

"It's a squad game, everyone has to play their part because the games come thick and fast. They have to be ready."