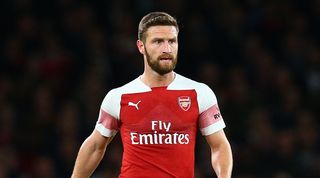 Gazidis swapped the Emirates Stadium for San Siro earlier this season and is now planning his first summer of recruitment at his new club.

The Rossoneri are battling for a top-four finish in Serie A as they seek to secure a return to the Champions League.

Gennaro Gattuso's side have the fifth-best defensive record in Italy's top flight this term, but Milan want to further bolster their backline ahead of the 2019/20 campaign.

And Mustafi, who spent two years in Serie A with Sampdoria between  , has emerged as a leading target for the seven-time European champions.

The German has endured a difficult season at Arsenal and will be allowed to depart for around £17m.

Unai Emery's side conclude their Premier League campaign with a trip to Burnley on Sunday.