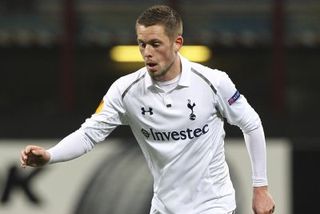 The Iceland international scored seven times in 48 appearances during the last campaign, with five goals coming in his last 15 games.

After his impressive form towards the end of the season, Sigurdsson feels that he can become an important part of manager Andre Villas-Boas' plans.

"Obviously it took me a while to settle in and get off the mark," he told the Tottenham Journal.

"Did the fans see the best of me last season? Probably towards the end. I wasn't happy with myself at the beginning until Christmas."

Sigurdsson was always confident that it was simply a matter of time before he showed the Tottenham fans what he is capable of.

"Sometimes you just fit in straight away - that's what happened at Swansea - but it's taken a bit of a longer time (than) I wanted here at Tottenham and hopefully I can do well this season."

Sigurdsson played for the entirety of the 1-0 win over Crystal Palace on Sunday - operating in his favoured position behind the strikers.

"It was nice to play there again, I enjoy playing there," he explained.

"Hopefully I'll stay there behind the striker because (Roberto) Soldado and Jermain (Defoe) are top strikers and it's quite easy and good to play behind them."