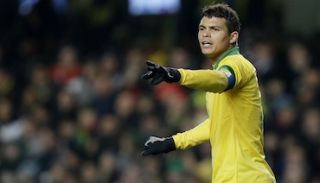 As host nation, the five-time winners will head into the 2014 tournament with high expectations in front of a demanding crowd.

Paris Saint-Germain stopper Silva is concerned that managerial upheaval might have unsettled preparations for the Seleção, who have won just one of their last six friendlies after a 2-2 draw with England on Sunday.

"It's very hard to form a team and get it ready for the World Cup in a year," he says in the July 2013 issue of FourFourTwo.

"[Mano] Menezes struggled a lot in the beginning but he was managing to put a plan in action, a formation that could work for us. And he was sacked in his very best moment.

"Now it's like being back in first gear, it takes time to get back up to top speed. It's a new staff with another style, and this requires time we may not have."

Brazil face France on Sunday in their final friendly before the Confederations Cup opener against Japan on June 15.

And, despite his reservations, Silva believes the tournament serves as an ideal workout for next summer's showpiece.

"It will fit like a glove in terms of preparation for the World Cup," he said. "If it wasn't for the Confederations Cup, I'm sure it would be much more complicated for Scolari to form a team.

"It will be good to spend this month together, to unite us more and more."

Read the full interview with Thiago Silva in the July 2013 issue of FourFourTwo digitally and in print. The issue features exclusive interviews with Wayne Rooney and Neymar, and looks at the 12 months that will define their careers ahead of the World Cup. The magazine also goes behind the scenes at St George's Park and talks to Jimmy Floyd Hasselbaink and Dejan Stankovic.