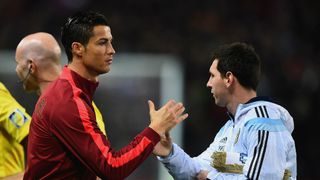 Diego Simeone rates Lionel Messi as a superior player to Cristiano Ronaldo despite believing the Juventus star is the better man for a bad situation.

A recording of Simeone stating his preference for Ronaldo emerged in the aftermath of Argentina's shock 3-0 loss to Croatia at the World Cup.

But the Atletico Madrid head coach has now affirmed his belief that Barcelona ace Messi is the standout of the pair, on the condition he is surrounded by top talent.

"If I had to choose between Messi and Ronaldo then most likely I would choose Messi," Simeone told reporters.

0 – Lionel Messi and Cristiano Ronaldo have never scored in the knockout stages of the World Cup; between both of them, they accumulated 1.090 minutes without scoring (666 Messi, 424 Ronaldo). Drought. June 29, 2018

"Yes I said [Ronaldo] on the video, but the conversation was between me and [Atleti assistant] German Burgos, talking about football as everyone talks about it.

"When I talked about Messi and Ronaldo it wasn't from the perspective of who is the best in the world.

"I just meant that if you have the chance to sign one of them for a normal club, with normal players, Ronaldo would probably fit in better.

"But with Messi, surrounded by great players, Messi is better than Ronaldo."

The record-breaking duo, who share five Ballons d'Or apiece, are set to compete in different leagues for the first time in a decade following Ronaldo's transfer from Real Madrid to Juventus.