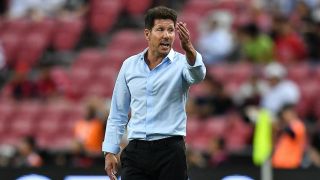 Atleti slipped to a 3-2 friendly loss to Paris Saint-Germain on Monday with Luciano Vietto and Kevin Gameiro culpable for missed chances.

French forward Gameiro last season produced his worst league scoring return in a decade with just seven goals, while Vietto netted only twice in a combined 20 LaLiga appearances for Atleti and Valencia.

Their struggles come amid rumours Simeone is attempting to sign his 23-year-old son Giovanni, who netted 14 times for Fiorentina in his second Serie A campaign in 2017-18.

When asked about Atleti's reported interest in Giovanni, Simeone responded: "No comment."

The head coach instead called for patience with his present crop.

"It is good to compete in games like that and the youngsters were very good again," Simeone said of Atleti's performance against PSG.

"We had a good first half without too much possession but with more direct play, but we still created some good scoring chances.

"I think we performed well, old and young. You find strength in creating chances and the team did that.

"We need patience and to keep working hard."

Atleti's stocks will be boosted by the availability of new signing Thomas Lemar for the friendly against Stuttgart on August 5.