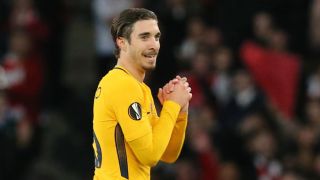 Diego Simeone hopes Atletico Madrid defender Sime Vrsaljko can be persuaded to reject interest from Inter and stay with the Europa League champions.

Inter head coach Luciano Spalletti has confirmed Vrsaljko is a transfer target for the Serie A side, the defender having excelled in Croatia's run to the World Cup final.

Vrsaljko battled with Juanfran for the right-back spot at Atletico Madrid last term, the 26-year-old featuring in 21 LaLiga matches, while he signed a new contract to 2022 in February.

Simeone has added Thomas Lemar from Monaco, Portugal international Gelson Martins and Villarreal midfielder Rodrigo to his squad, with the Atletico boss wanting Vrsaljko to be retained.

"We're very happy with Sime," Simeone said. "He had a very good World Cup, especially showing what he can do in attack and was decisive for his team.

"We are waiting for him to arrive on August 6 and after that we will see the needs of the club, I'm happy with what he's given us, he's an important player.

"The sporting management team handle singings above the point of talking about what we need during the season, it's difficult to talk about specific names.

"You have to be careful because they keep coming up and there are always rumours that some are leaving or others are coming, but I can't add anything."

Griezmann went on to score four goals as France triumphed at Russia 2018 and Simeone believes the 27-year-old can continue to improve.

"I'm very respectful of player's decisions when they stay and when they go, an opinion about how he feels is a good question for him," Simeone added.

"I hope he keeps growing even more than he has until now, he has no limit, he's important for us and is a good team-mate, surrounded by the people who form a squad which is improving."

Atletico play Paris Saint-Germain in the International Champions Cup on Monday ahead of friendlies against Stuttgart and Cagliari.