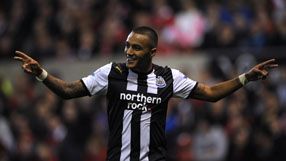 Simpson previously spent half a season on loan at Newcastle's bitter rivals Sunderland, even helping the Black Cats to promotion, but he is now firmly a member of the black and white family.

Ahead of Sunday's trip to the Stadium of Light, a fixture that will be Simpson's fifth north-east derby if he is selected, the full-back revealed how he enjoys the inevitable abuse that will come his way from home fans.

Speaking to The Journal, Simpson said: "It's just a buzz. A positive buzz. You want them to do it. I'm almost saying 'come on give me some.'

"I like it personally. It happens during the game when you're taking throw-ins and stuff and you hear them on the sideline. I like it, some players might be different but I think most of us will enjoy them giving us a bit of stick when we get a tackle and get stuck in.

Simpson has arguably already done his part in fanning the pre-derby flames, following a picture that surfaced on the Internet of him holding up a placard asking 'Who is Steven Fletcher?' while on a night out in Newcastle – a clear, jesting nod in the direction of Sunderland's new striker.

Despite the pressure surrounding an occasion such as the derby, the Newcastle defender was keen to stress that his side has ensured their preparation has been similar to any other game.

He said: 'We haven't done anything different. We know what we've got to do. It is three points and we need to get three points"