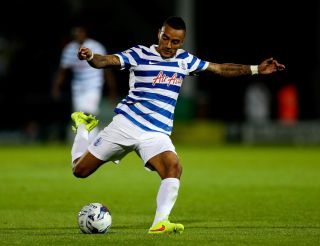 The 27-year-old signed a three-year deal at the King Power Stadium on Saturday after QPR accepted an undisclosed fee from Nigel Pearson's side.

Simpson, a graduate of Manchester United's youth system, joined QPR in June 2013 after being released by Newcastle United.

The right-back became a key figure in the QPR defence during his first and only season at Loftus Road but has now been allowed to move on.

Announcing the deal on their official website, Leicester manager Pearson said: "I'm really pleased that we have been able to secure a defender of Danny's quality. He will add more good competition to our squad, which is very healthy for the group.

"He already knows a number of our players from his time with Manchester United and he is the kind of character we look for, so I'm sure he will settle in quickly."

After completing his move, Simpson said: "I'm really excited. I've had a look around the facilities, which look fantastic, and had a good chat with the manager, who I'm really looking forward to working with.

"He told me that there's a good group of players here that demand a lot of each other and I think, from speaking to other people, he knows I'll work hard every day to fit into that. I’ve got a really good feeling about this."

Simpson looks set to be swiftly followed out of the Loftus Road exit door by Loic Remy after QPR manager Redknapp confirmed the France international's imminent departure to Chelsea prior to the 1-0 win over Sunderland.