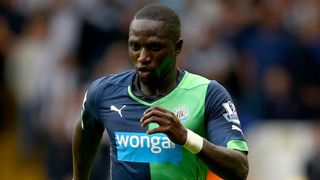 A hamstring injury suffered during England's 1-0 World Cup qualifying win over Slovakia on Sunday will prevent fullback Rose from featuring at bet365 Stadium.

Goalkeeper Hugo Lloris is available again after recovering a hamstring problem of his own and is likely to replace understudy Michel Vorm.

Sissoko, meanwhile, could be in line for his Spurs debut after moving to White Hart Lane from Newcastle United on transfer deadline day.

"Sissoko is maybe in the squad," Pochettino said of the 27-year-old France international.

"He arrived with us for the first time yesterday [Wednesday] and he was in a good condition, but I will decide tomorrow."

Sissoko impressed for hosts France during their run to the final of the European Championship, having failed to prevent Newcastle's relegation to the Championship last season.

Pochettino added: "Sissoko is a player who can help us a lot. You know how he is because last season he was in Newcastle and in the Euros he was fantastic.

"He is a player who can bring experience, he is fast and strong and when you play a lot of games you need a lot of competition to maintain your levels."

According to the Argentine coach, late deals to bring in Sissoko, as well as teenager Juan Pablo Gonzalez Velasco and Georges-Kevin N'Koudou, will equip Tottenham with the depth they need to fight on four fronts, having qualified automatically for the Champions League courtesy of last season's third-place finish.

"I was relaxed as the window was closing - I was in Spain! I wasn't worried about that," he said.

"I was happy before and then after we added three players in the last three days, we have a squad that can compete in the different competitions.

"We have a difficult season but I am happy with my squad."

Midfielder Mousa Dembele will serve the final game of a six-match suspension for violent conduct against Stoke.