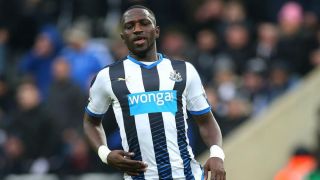 Moussa Sissoko has ruled out a move away from Newcastle United this month, but admits he could reassess his future after Euro 2016.

The France international has been linked with a move to Napoli, but does not feel a January departure from St James' Park would be the right move.

With regular football on offer at the Premier League side, the 26-year-old thinks he has the perfect platform from which to earn himself a place in Didier Deschamps' squad for the European Championship.

However, the former Toulouse midfielder admitted the situation could change following the tournament in France.

"I do not think I will leave Newcastle because the club does not want to let me go. And then I ask myself about the timing, just ahead of the Euro," Sissoko told Telefoot.

"I have been called up to the national team despite our results. I get to play every weekend and perform well.

"Like every player I dream of winning titles and matches in the biggest clubs. I will think about my future after the Euro."

Sissoko has been a regular part of the France set-up under Deschamps and is desperate to be involved in any way when Euro 2016 begins in June.

"I have been thinking about it for a long time. It's a very special event for all of France and the players," he said.

"I have to give my best to be on the list. To be a starter would be great, but just being in the squad would be enormous."