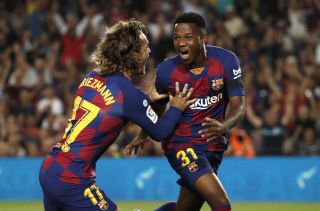 Teenager Ansu Fati stole the show again as Barcelona posted a convincing win over Valencia at the Nou Camp.

The 16-year-old became Barcelona’s youngest ever scorer when he netted against Osasuna prior to the international break and, pushed into the starting line-up, he needed less than two minutes to find the net again.

Fati then set up Frenkie De Jong for the second only four minutes later and, although defensively they were shaky again, Barcelona went on to claim a 5-2 win.

The start was certainly not what Valencia needed after a turbulent week that saw head coach Marcelino axed by owner Peter Lim and Albert Celades installed in his place.

Lionel Messi was again missing with a calf injury, but Barca had no trouble creating chances, with Gerard Pique and substitute Luis Suarez scoring in the second half, the latter with a brace to celebrate his return to fitness.

Kevin Gameiro was a real thorn in Barca’s side, though, and he pulled a goal back in the 27th minute.

The goal originally looked set to be ruled out for offside but a VAR check eventually decided he was not in front of the final defender.

Fati continued to be a major threat for Barca but, when the third goal came in the 51st minute, it was defender Pique in the right place at the right time, staying forward after a corner and tapping in after Jasper Cillessen fumbled a shot from Antoine Griezmann.

Four minutes later Nelson Semedo hit a post but Barca did not have to wait long for a fourth, Suarez replacing Fati and immediately finding the net with a fine curling shot.

Suarez netted his second and Barca’s fifth in the 83rd minute, sweeping the ball past Cillessen at the near post.

There was still time for substitute Maximiliano Gomez to grab a second for Valencia but it did not take the gloss off a second victory in LaLiga this season for Barca.

With Atletico Madrid beaten by Real Sociedad earlier in the day, Barca are now only two points behind the early pacesetters.