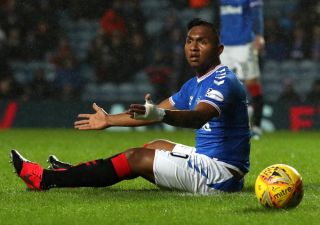 Sky has apologised to Celtic and Rangers over “inaccuracies” in the translation of an interview given by Alfredo Morelos.

The Rangers striker was reported to have said in a Sky Sports News television interview conducted in Spanish that he had experienced racism during his time in Scotland.

But Celtic questioned the accuracy of a translation which claimed he had accused home fans of shouting racist abuse at him at Parkhead on December 29.

Sky has now responded to Celtic’s call to investigate the translation, saying in a statement: “We have identified inaccuracies in the translation of Sky Sports News’ interview with Alfredo Morelos.

“We apologise to both Celtic and Rangers football clubs as well as Alfredo Morelos for the issues caused by these errors.

“After numerous steps undertaken by Sky to verify the interview thoroughly we can be clear that at no point did Morelos allege that any racial abuse was directed at him by Celtic supporters in the interview.

“We apologise to the supporters of Celtic Football Club for this serious error.

“We are reviewing our procedures for translated interviews to ensure this does not occur in future.”

Sky has published a full transcript of the video on its website with a professionally verified translation.

The broadcaster plans to publish a fully subtitled video on the page as well.

Rangers had previously claimed the Colombian was racially abused when walking off following his late red card as they defended the forward’s cut-throat gesture towards supporters in the main stand.

But Celtic launched a firm defence of their supporters in a club statement.

The Scottish champions said: “Celtic, a club open to all since its inception, abhors racism.

“Our consistent stance is that wherever racism exists it should be tackled head on.

“Celtic will always investigate any report of racist behaviour and take appropriate action. This is a standard which all clubs should meet.

“Celtic needs no encouragement to pursue racism, particularly as players and management at the club have suffered abuse persistently over the years.”

Police Scotland confirmed on December 31 that the force was investigating complaints of racism towards a Rangers player.