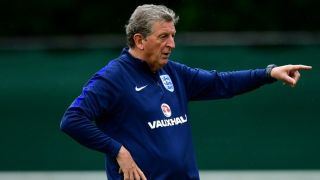 England manager Roy Hodgson is expecting Slovakia to be "tough" opponents in Monday's final Group B match at Euro 2016.

Hodgson's side are in pole position to top the group after following a 1-1 draw against Russia with a late 2-1 win over Wales, while Slovakia have three points from two games.

The England manager noted Slovakia were "flying" during the qualifying process for Euro 2016 and looked like going through to the finals unbeaten, before losing to Spain and Belarus after six straight victories at the start of their campaign.

"There are lots of players in the Slovakian team we need to watch out for," Hodgson said in Sunday's media conference.

"They were flying in the qualification group and looked as if they were going to go through without losing a game.

"Wayne [Rooney] and his team-mates have been introduced to the Slovakian team. We've given them an idea of what they think the team will be. They have four very good attacking players.

"I know [Martin] Skrtel well from my time at Liverpool. They're going to be another tough opponent for us. They'll be trying to beat us too, that's the beauty of football, it makes for a good game."

A spiky Hodgson bridled at a poorly-worded question from a journalist regarding England's ability to develop as a team during the tournament.

"It's nice to be educated at a press conference," retorted Hodgson. "Now I know what we need to do.

"We're always working to improve the understanding of our players. Our approach has to be tailored occasionally. We've been working on it for four years.

"Our inexperienced players have a steep learning curve. We'll try to give them what they need to give a performance that will help the team to win."

Hodgson suggested the prize of facing a third-placed team is more of an advantage than heading to Paris in the next round, should England win Group B.

"The important thing is to be there," he said. "We would like to win the group. If that means Paris that's good. All the venues are fine.

"We don't want to win it because it's Paris, we want to win the group to see us playing against a third-placed team."