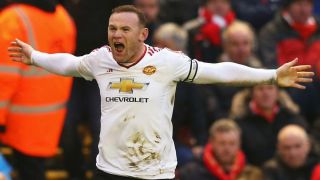 Rooney's winner in the 1-0 success against Liverpool at Anfield on Sunday was the striker's fifth goal in his last four outings, having been dropped for the Boxing Day defeat at Stoke City amid considerable criticism of his form during the first half of 2015-16.

But, with the England and United skipper back among the goals, Smalling feels Van Gaal's decision to bench his star forward has paid dividends.

"Since that game [at Stoke], he has come back in and shown he is a top-class performer," the centre-back told reporters.

"I think [being left out] can refresh you and spur you on a bit more to prove to everyone just how good you are. Strikers go through periods when they don't score but the best ones are those that come back and get on another run.

"Wazza [Rooney] has shown that [ability to bounce back] throughout his career and it's good to see he is among the goals again."

De Gea - who came close to joining Real Madrid in August - kept United in the game up until Rooney's winner and Smalling hailed the Spaniard's influence on the defence this season.

"When we knew he was lining up for us for the whole season, it was a great feeling because he is one of the best," he said.

"He is a very calm guy but on the pitch, he is very much talking to us as a unit and we know his game inside out.

"It's good to know that if we are beaten as a defence, we still have a great chance to keep the ball out."