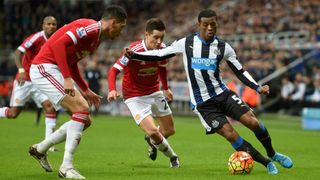 Manchester United defender Chris Smalling has hit out at referee Mike Dean for his decision to award Newcastle United a penalty in Tuesday's 3-3 Premier League draw.

Dean pointed to the spot after a duel between Smalling and Aleksandar Mitrovic and the United defender was left to rue what he perceived to be inconsistent decision making by the official.

"We were both jostling for positions throughout the game," Smalling told the official United website.

"The referee said we were both at it so he didn't give anything and I think there needs to be that consistency with the decisions.

"You can see my shirt was clearly pulled as well, so it's just about consistency.

"If you're going to give them, fair enough, but you need to be giving them on a regular basis."

United will be looking to return to winning ways when they take on Liverpool at Anfield on Sunday and Smalling is optimistic about his side's chances of getting a good result.

"I think in recent times we’ve done very well against them," he added.

"Obviously this year at Old Trafford and last season we've got very good results, so we're very confident of going there and causing them a problem."