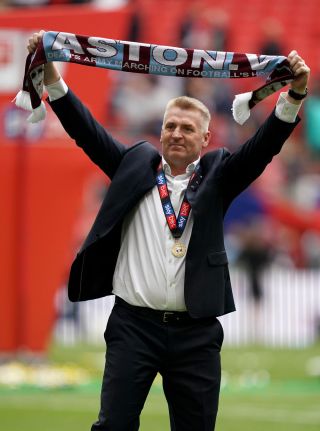 Aston Villa boss Dean Smith got the royal seal of approval as he guided the club to a place in the Premier League – where he feels they belong.

Villa are back among the elite after three seasons away as goals from Anwar El Ghazi and John McGinn helped secure a 2-1 win over Derby in the £170million Championship play-off final.

The Wembley showdown was watched by Villa fan Prince William, who celebrated enthusiastically at the final whistle.

The club’s media team then quickly knocked up a tweet showing the Duke of Cambridge knighting Smith.

Afterwards Smith said: “I haven’t met him yet but I’d like to. I could tell him he supports the right team.”

It was an emotional day for the Smith family, all brought up as Villa fans, and especially after he had revealed his Villa-supporting father Ron suffers from dementia and does not know his son is the head coach.

“I went to see my old man on Friday and he kept his eyes open for two minutes,” said Smith.

“I told him the next time I come to see him I’ll be a Premier League manager, and he smiled.”

The former Walsall and Brentford chief added: “Reality has just set in. It all feels a little bit surreal but it’s no more than those lads deserve and no more than this football club deserves.

“The potential of the club is massive. It feels right. I believe this is a Premier League club. That’s not me speaking with a supporters’ head on. History tells you that.

“We’ve fallen on hard times. Last season was tough for everyone who went through the defeat here to Fulham.

“The players and the owners deserve what we are going to get.”

Derby pulled one back through substitute Jack Marriott with nine minutes remaining, but Frank Lampard’s side were unable to find an equaliser.

Reports linking Lampard with a managerial return to his former club Chelsea will not go away, especially following a defeat which condemns Derby to another season in the Championship.

But Lampard insists he will not be jumping ship to follow Smith into the top flight.

He insisted: “That’s irrelevant. I’ve got a two-year contract here, I’ve loved working here and I want to continue that, and continue progressing.

“After my first year and the opportunity this club gave me it’s massively important that everyone understands that is my overriding feeling.

“So that’s where I am. I’ll go away tonight and have a couple of beers with the lads and the staff, and afterwards we’ll talk about where we go forward.”