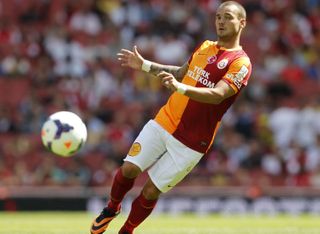 Netherlands are cruising at the top of their FIFA World Cup 2014 qualification group with six wins out of six and next face Estonia and Andorra in September, with Van Gaal deciding against recalling the 29-year-old.

Sneijder was omitted from the squad that played a friendly against Portugal earlier this month because the coach felt he was not fit enough. He has made one competitive appearance for Galatasaray since and is again missing.

The PSV central defensive pairing of Jeffrey Bruma and Karim Rekik have both been named in the provisional 22-man squad for the qualifying double header.

Rekik has impressed under Phillip Cocu since his loan move from Manchester City and has been rewarded with his first call-up to the senior squad.

Van Wolfswinkel replaces the injured Klaas-Jan Huntelaar after the Schalke striker was ruled out for several weeks with a knee injury.