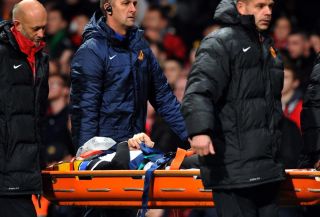 The midfielder was involved in a collision with Rafael da Silva during Tuesday's 4-0 League Cup loss at Old Trafford and received lengthy treatment on the pitch.

He was taken to hospital in Manchester to be checked over and was released late on Tuesday.

And the Premier League club have confirmed that he will return to Norwich on Wednesday to be assessed at their training ground in Colney ahead of Saturday's trip to Manchester City.

Players who have suffered concussion are often advised to rest for up to five days to ensure they feel no ill-effect when they return to action.

Losing Snodgrass for the clash with Manuel Pellegrini's men would be a blow to Norwich boss Chris Hughton as he looks to steer the side out of the Premier League relegation zone.

The Scot has featured in eight of their nine league matches but is yet to score this season.